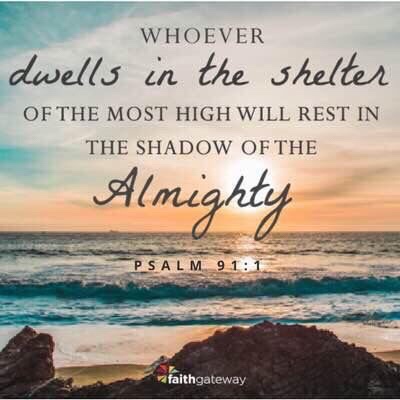 There is a place deep in the heart of God where we may find shelter. It is a place of refuge and safety from any evil that might come upon us. Psalm 91, a firm favourite of many Christians, holds powerful promises which, if believed and acted upon, are life-saving. “He who dwells in the secret place of the Most High will abide under the shadow of the Almighty.” (v.1)

Do take time to watch the short video of this beautiful psalm with lyrics (link below). Note how the psalmist gives an astonishingly comprehensive range of catastrophic circumstances in which we are assured of God’s total protection for those who are resting in the secret place of His heart

Unprecedented Protection for an Entire British Regiment throughout World War 1

There are awe-inspiring testimonies of miraculous deliverance from acute danger in time of war. It has been recorded that during World War 1 (1914-1918), L.T.C. Whittensley was a Regimental Commander in the British Army. Every morning his regiment recited the 91st Psalm, declaring aloud their faith that God would protect them from danger. This regiment went over the wall on a number of occasions during the course of the war, facing furious enemy fire and almost certain death. Thousands of men were killed on their left and right sides, but not a single one of the soldiers in this regiment was wounded. It was reported that the German bullets seemed to bounce off Regimental Commander L.T.C. Whittensley’s men.

The Passion Translation puts it succinctly: “Even in a time of disaster, with thousands and thousands being killed, you will remain unscathed and unharmed. You will be a spectator as the wicked perish in judgment, for they will be paid back for what they have done!” Psalm 91: 7-8.

British Soldiers Going Over The Wall in WW1 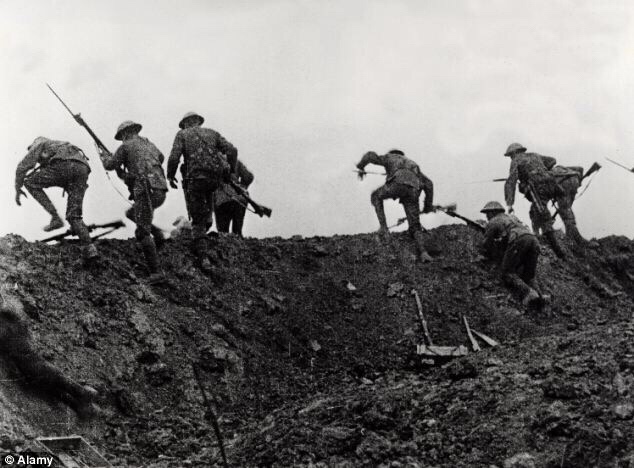 A Miraculous Escape from Certain Death in World War 11

An awe-inspiring event took place during World War 11 (1939-1945) at Dunkirk, France. It was reported by war correspondent, C.B. Morelock, that more than four hundred men were trapped on a beach without any shelter from the enemy whatsoever. Sixty German aircraft flew very low directly over the men, firing machine guns, and bombing the trapped soldiers. The men were lying face downwards on the sand, packed closely together. They were facing certain death. All the four hundred men were not only reciting Psalm 91, but shouting it at the top of their voices, proclaiming in faith that God would keep them all safe from the deadly fire of the enemy. Not a single man was even scratched! Navy personnel who rescued the survivors from that Dunkirk beach reported hearing them still shouting the Psalm when they came to their rescue. The Word of God, spoken in faith by our mouth, is as powerful as the written Word of God. Our God always backs His Word when it is spoken out loud in faith. It is in this way that our faith is released, and God honours that.

Many would be inclined to describe the deliverance of four hundred soldiers from certain death as ‘unexplainable.’ However, those who enjoy an intimate personal relationship with God, living in the heart of our Heavenly Father, know Him as their refuge and their fortress’ (v.2). They know that “He covers them with His feathers and under His wings they can trust” (v.4). This brings to mind the words of Jesus,

“O Jerusalem, Jerusalem… how often would I have gathered your children together, even as a hen gathers her chickens under her wings.” (Matt 23:37). Truly the heart of God is to protect His children as tenderly as that.

On 24 August, 1992, Hurricane Andrew made landfall Near Homestead, Florida. It developed into a category 5 Hurricane with wind speeds reaching 175 mph. It is the second costliest tropical cyclone in United States history: $26.5 BN. In Florida alone 25,524 homes were destroyed, and a further 101,241 homes were badly damaged. 1.4 million people lost their electricity, and 150,000 lost telephone services. Major job losses were incurred though, on the other hand, many benefited from the urgent need of construction workers, roofers, carpenters, electricians, highway builders and many other skilled workmen. 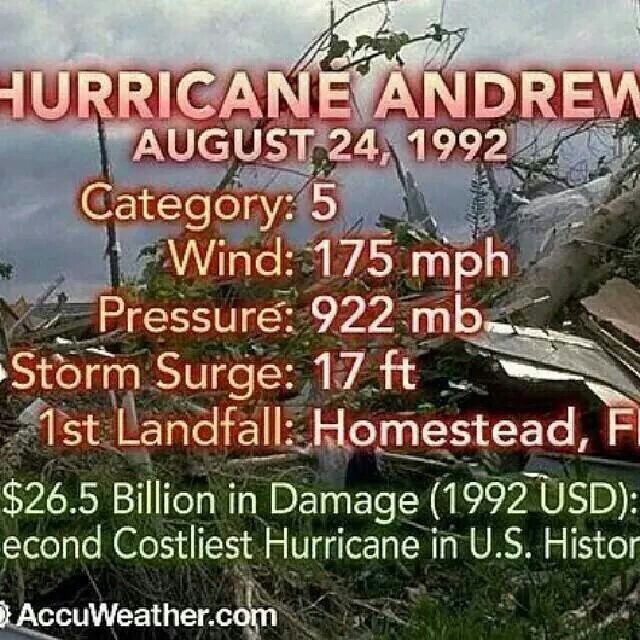 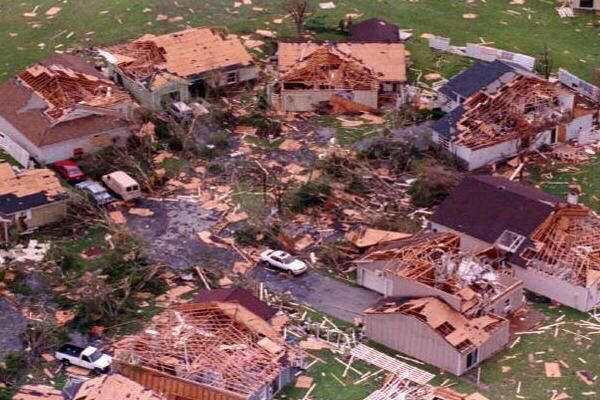 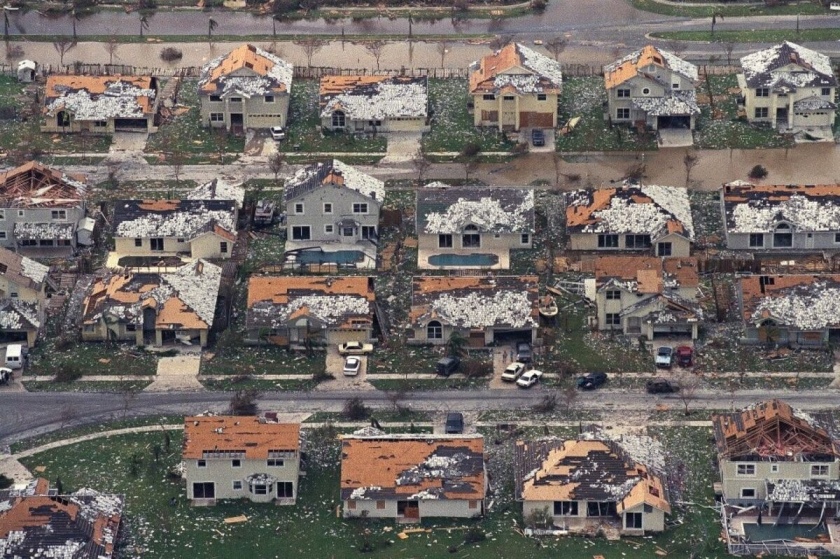 A Few Facts About Hurricanes

The storm surge of Hurricane Andrew rose to over 18 feet and the wind reached 175 mph.

The word ‘hurricane’ comes to us from the Spanish Conquistadores (conquerors, explorers) who carved up the New World for themselves in the 16th and 17th centuries. They picked it up from Taino, a language spoken by the Arawak, indigenous people of the region. ‘Huracán’ was the Taino word for ‘storm.’ Some authorities suggest the word can mean ‘evil spirit’ or ‘storm god.’

Only One Family Escaped the Destruction Unscathed

This testimony is astounding. As Hurricane Andrew wreaked havoc, demolishing everything in its path, the entire property of one family remained intact. Every single house over a vast area around them was either razed to the ground or seriously damaged. Garden sheds were tossed high in the air like match boxes, trees were uprooted and fences destroyed. Nothing escaped the fury of Hurricane Andrew’s 175 mph winds — apart from one house — to the utter astonishment of the insurers who soon visited every resident in the area. What could be the reason for this, they wondered? There must surely be an explanation. There was!

As Hurricane Andrew roared through the area, sounding like a freight train, sweeping everything out of its way, one house remained unharmed. Not a pane of glass was broken, not even a plant was disturbed. The garden shed was untouched and the fence remained intact. Why was that? It was unheard of, given the catastrophic force of this fearsome hurricane. Del and Pat Hicks had prepared well; food and water was ready; they had already weathered four hurricanes. As the storm roared all around them, Del and Pat Hicks knew the authority that they had in the name of Jesus. They remembered how Moses had been instructed by the Lord that the blood of the lamb had to be applied to the doorposts of every Israelite home when the Angel of death devastated the land of Egypt, so they applied the blood of Jesus and quoted the wonderful promises of total protection in Psalm 91.

Earlier, Pat had walked through their yard laying hands on the trees, declaring that they were now under the shadow of the Almighty, and touching the shed and the walls of the house, placing every single thing under the protection of God. Fourteen family members gathered in their home. They could hear things crashing into the house. At one point it seemed that the house was about to break in two and the roof be blown away. They all laid hands on the walls, commanding them to stand strong and continue supporting the roof.

In the morning they saw that, although their shed door had been blown open, everything was still there. They had suffered no damage at all. Their property immediately became like a tourist attraction. Everyone in the area was dumbfounded! This family home alone was unscathed in a forty mile disaster zone. What a glorious testimony to the unfailing efficacy of confessing out loud the power-packed promises of Psalm 91! How God was glorified! May we all learn to follow their unwavering example of confessing out loud their faith in the Word of God!

The Angels were working overtime to protect this family who leaned entirely upon their God!

YouTube has several extraordinary videos on Hurricane Andrew. These two are not very long and are well worth watching: 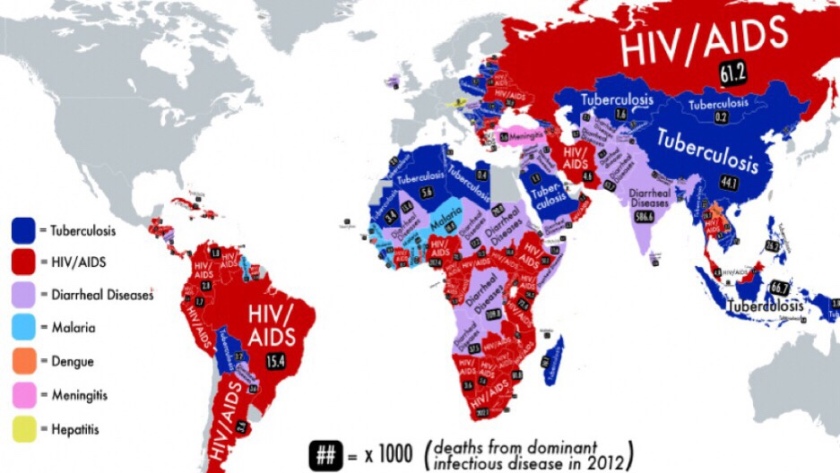 The facts given here are simply horrifying. The ice is melting in Antarctica , and this is bringing back old diseases, and also some new diseases. This map draws its data from the World Health Organisation and shows the current state of affairs. In the very near future we will be hearing much more about the comeback of old diseases. It is a fact that the Black Death is back with a vengeance. New dangerous diseases are being found at a rapid rate. It is stated that public Western outbreaks are not far away. Our overuse of antibiotics has also caused problems and now there are many “superbugs” that are 100% able to continue even after antibiotics have been taken.

However, Psalm 91 promises “Surely He shall deliver you from the deadly pestilence” (v.3) Pestilence is any virulent or fatal disease. It is an epidemic that affects huge numbers of people. God promises us supernatural protection. We also have God’s promise that “When we live our lives within the shadow of God Most High, our secret hiding place, we will always be shielded from harm. How then could evil prevail against us or disease infect us? God sends angels with special orders to protect you wherever you go, defending you from all harm. If you walk into a trap, they’ll be there for you and keep you from stumbling. You’ll even walk unharmed among the fiercest powers of darkness, trampling every one of them beneath your feet!” (Psalm 91:9-13)

God is for us! God is with us! God will not fail us! We can safely commit our lives entirely to our faithful God and His total protection and provision. It would be an excellent idea to memorise Psalm 91. It is undoubtedly becoming increasingly important to pray the protection of this Psalm out loud daily over ourselves and our loved ones. We have nothing to lose — and so very much to gain.

I was born in England in the middle of WWII. I am a retired Spanish and French teacher, and in later years I became a Bible School lecturer. My husband and I have been very happily married for fifty-one years. We have three children and three grandchildren. The most important choice I made in my life was to ask Jesus Christ to come into my heart and be my Saviour. I was born again during my first term at university in 1961, after searching for the truth for several years. Jesus has brought me into a beautiful, close, intimate walk with Him and I chat to Him often throughout the day. When my husband and I took early retirement we worked as missionaries in India. We were privileged to see awesome healing miracles, and many lives transformed by the power of God. I have also worked for Jesus in Spain, France and South Africa. It is very much on my heart to write about the breathtakingly wonderful things I have seen Jesus do, and to encourage others to trust Him for themselves. The Lord has always been there for me through the almost sixty years I have known Him. He has never let me down, and His grace is always more than sufficient in times of need. Jesus shows His boundless love for me in so many ways. Truly, I am So Greatly Loved. View all posts by sogreatlyoved

This is a text widget. The Text Widget allows you to add text or HTML to your sidebar. You can use a text widget to display text, links, images, HTML, or a combination of these. Edit them in the Widget section of the Customizer.
Loading Comments...
%d bloggers like this: